During this year's WWE Hall of Fame ceremony, the legendary The Undertaker, who after retiring at 30 years of career, was inducted into the company's Ark of Glory, between honors, celebrations and big thanks. In the class of 2022, surely the biggest name to have been included in the McMahon Hall of Fame was that of the Deadman, who obviously after the introductory speech by the WWE Chairman himself, Vince McMahon, wanted to dwell a lot on chatting and thanking all his supporters, both those present in the arena where the ceremony was taking place, and all those connected from home.

With a masterful and majestic career like his, there would have been to talk about the entire weeks, between working anecdotes and relationships with fans and colleagues, with Undertaker who will still be able to tell personal things, even in a very personal show that WWE has planned for next month.

With a press release and a poster that appeared in the last few hours on social channels and on the WWE website, the McMahon company wanted to confirm how its new entry into the Hall of Fame as well as the most famous gravedigger in the entire wrestling world, The Undertaker, will present a personal show, called "Undertaker 1 deadMAN SHOW" during the Summerslam weekend.

From Nashville's Wildhorse Saloon, Undertaker will present his show of him in which he will tell all anecdotes and real life stories never told in front of WWE cameras or in front of his interview cameras. All this will be staged next Friday 29 July, with tickets for the event that are already available from Tuesday 28 June, to be entitled to a VIP Pass, with which you can also do a meet & Greet with the Deadman.

"UNDERTAKER 1 deadMAN SHOW will feature“ The Phenom ”in an intimate setting, sharing never-before-heard stories from his Hall of Fame career and taking questions from the WWE Universe in attendance."

"UNDERTAKER 1 deadMAN SHOW will see The Phenom in a very intimate session, go and share unheard-of stories from his Hall of Famer career, while also answering questions from the WWE Universe in the audience."

But let's see the poster of the event with the synopsis of the same: 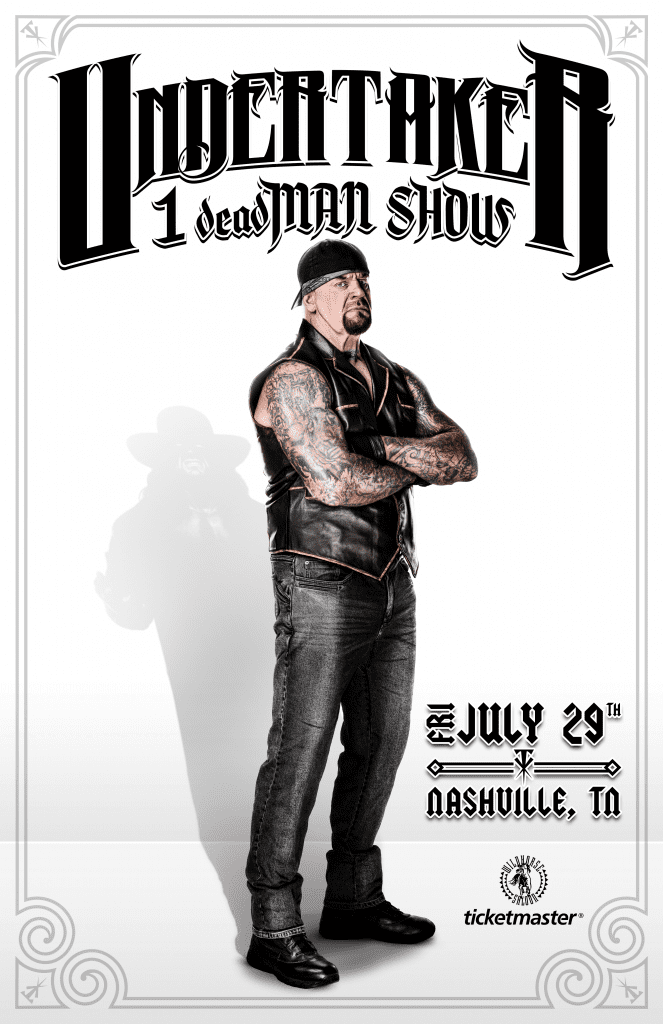