Bray Wyatt is no longer a character in the world's number one pro-wrestling company: WWE. For a few days now, fans have had to deal with yet another release of the company, which has also gone to cut among the many the former Universal Champion of Monday Night Raw and Friday Night Smackdown, who in the last two years had managed to create a truly formidable character, which had attracted a lot of interest on the federation of McMahon, with only one character.

Over the course of his McMahon ring history, Bray Wyatt had eventually become a bit like Mick Foley, whose personalities were multiple and who brought them all to the stage together, albeit at different timelines. Even in the last year, in fact, Wyatt had appeared as himself, as the leader of the defunct Wyatt Family and therefore the guru of the swamp and then as the evil The Fiend, with supernatual powers, who had also survived a fire literally set on him.

worn by Randy Orton. As we reported, the match starring his former adept, Alexa Bliss, was literally cut down by the We Want Wyatt chants, which WWE somehow tried to cover in vain, as there is no longer a virtual crowd, but as there is one in flesh and blood at the ringside.

After a week from the last episode of Raw, in which on the most beautiful of the most important segment between Bill Goldberg and Bobby Lashley, the audience had started singing the same choir, also tonight, in the episode of the same show, it was repeated the same script, but this time with a character more dear to Wyatt, his former friend Alexa.

After hearing the choirs dedicated to him, Wyatt would log on to Twitter and like a highlight of the evening, in which it was emphasized how the audience was calling out loudly. With a simple like, which obviously hasn't escaped anyone, Wyatt has thus made his fans feel his closeness, with the members of the WWE Universe who would like to see him as soon as possible return to perform somewhere, even outside of a WWE ring, as long as it brings one of its amazing characters to the stage, which could soon have another one on the list as well. 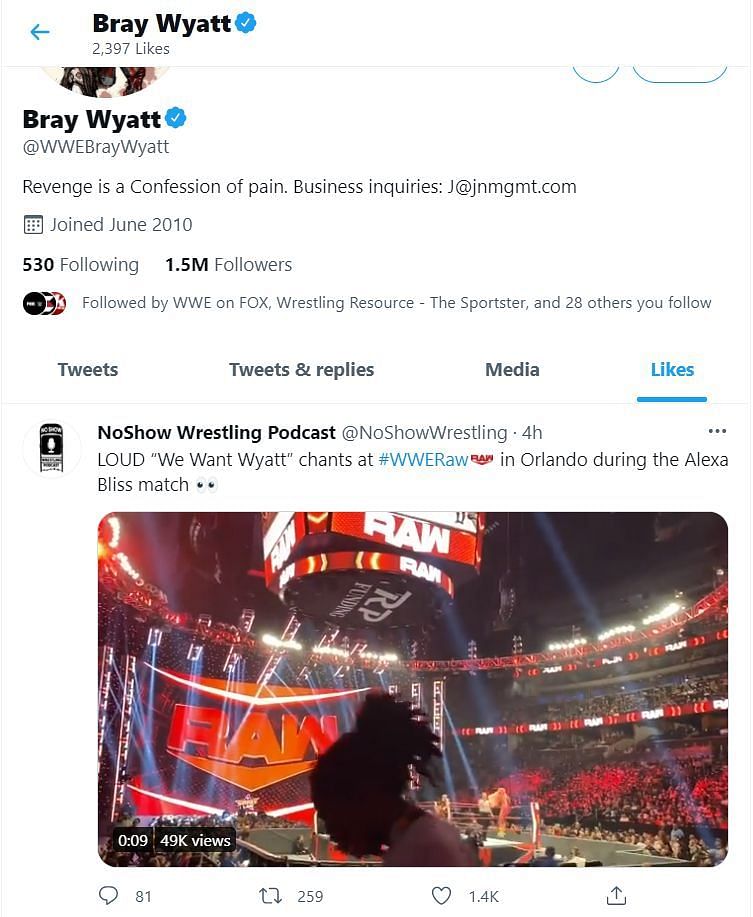