In the last weeks of Monday Night Raw, one of the protagonists of the female sector of the red show was strangely that Nikki Cross, who for months had not even opened in front of the cameras of the McMahon family, at least not in an important way.

During the last episodes of Raw, in fact, the Cross even managed to receive important victories against Charlotte Flair and none other than the champion of the red roster, Rhea Ripley. After beating both of them in a Beat The Clock Challenge, it seemed time for Nikki Cross to bring something new to the scene and apparently it all, in the latest episode of Monday Night Raw, when Nikki showed up with a look and a character completely different from those we are used to seeing sewn on the Scottish fighter of the company.

During the night of Raw, WWE decided to stage a match for couples, with Alexa Bliss and Nikki Cross on one side and the company's former couple champions, Nia Jax and Shayna Baszler on the other. It is at this point, however, that the surprises were born, because if on the one hand Alexa Bliss presented a whole new entry music to make her entry into the ring, on the other hand, Nikki Cross had yet to enter scene, whenshe was filmed by the cameras of the ThunderDome, in the gorilla position.

Initially, WWE only framed Cross's face, with a blue mask and painted eyes, while Cross did a promo before her match. While the Scot was finishing her promo, the cameras cut off on the full figure, going to frame the new character brought to the scene by Cross, dressed entirely like a super-heroine, as done in the past by athletes like Hurricane or Mighty Molly.

It is not known at the moment if Nikki will keep these characteristics only for now or if this will be the new character that the WWE has entrusted to its former couple champion, so we just have to wait and see what will arrive in the next episodes of the red show. 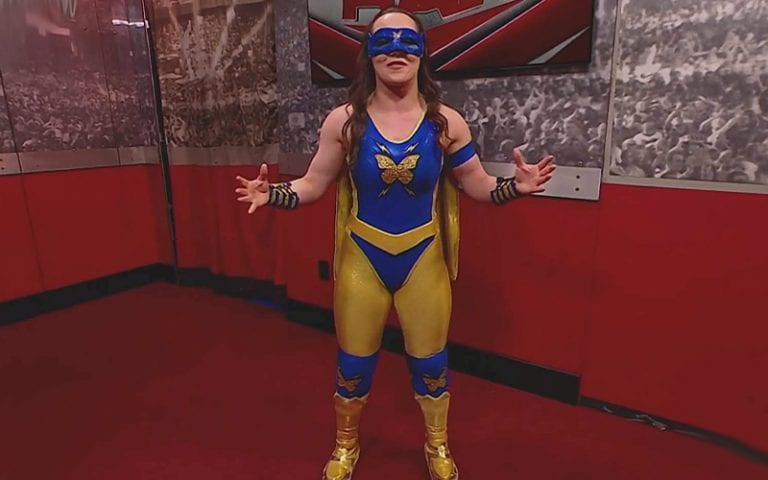