During the special episodes that WWE usually airs from time to time for the milestones achieved by Monday Night Raw or Friday Night Smackdown (such as Raw 1000th), it has often happened that to peep into the rings of the Stamford company WWE legends returned, with some well-known faces from the past of the McMahon federation returning one night only for a special appearance.

Among the many faces that have appeared in one or more shows over the last decade, a few times we have also seen the former WWE women's champion, Victoria, real name Lise Marie Varon, appear, who has fought in other major world companies such as Impact Wrestling with the name of Tara, who at the moment would have decided to stop wrestling wrestling (from 2019) and who apparently should have also made a special appearance in that of the Royal Rumble two years ago, but it was not so in the end.

After hanging up her boots, the former Impact Wrestling champion, when she was still called TNA and the former WWE Women's Champion, would have decided to continue working in the entertainment world, but in the last few hours her fans would be were a bit shocked by the progress of her career.

In the last few hours, a new profile has been created on the well-known portal almost entirely for adults, OnlyFans, where Lise Marie Varon, Victoria's real name, will put all her paid posts, accessible by those who pay a subscription to the athlete.

For those unfamiliar with OnlyFans, the well-known paid entertainment site, it usually serves to show targeted content for an adult-only audience (and therefore forbidden to minors), with which well-known personalities manage to raise good money, having the usufructuaries a subscription to be paid to the owner of the channel.

At the moment we don't know what kind of content Lisa wants to share on her channel, since in the past other colleagues have also used the site only to put photos or videos in cosplay clothes and nothing more extreme.

At the moment, her channel only has 3 posts from the girl. 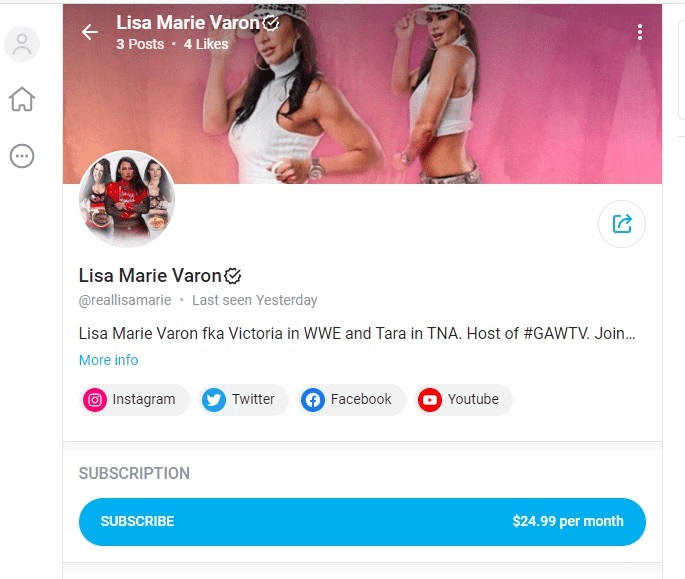