Did you know that Andre De Grasse was struggling to train? Yes, he himself, the Candese winner of the 200 at Tokyo Olympics 2021. During the lockdown Andre trained at home, as he confirmed to CBC in an interview. In a live Instagram, however, he said to work out by jogging around his block, to maintain a good physical condition.

De Grasse also trained in the pool, also helped by the children's desire to swim in the pool. After all the problems of the lockdown, once he found a semblance of normality, De Grasse started his real training. His physical preparation was needed to find the pace of the race.

He did specific work on the trajectory to keep cornering, then some relaxation, and finally a quiet ride. In addition, also repeated 70 meters to try at least five times. Then he would get to the general rehearsals of the race, also trying the relay with the always complicated passing of the baton.

After a day off, the workouts started all over again. This resulted in a fantastic medal in Tokyo. 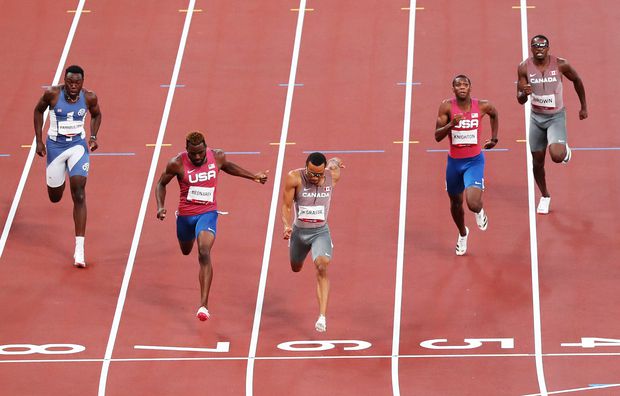 Simone Biles: "We athletes are not just shows"

American Simone Biles won bronze in the final on the beam. The same result of Rio 2016.

But the embrace with her companions, moved, is the symptom of days like nightmares for the star of world gymnastics. Experienced twisties in the first week in Tokyo made her lose her bearings, especially in backward stunts and twists.

Biles finished his only race with 14,000 points and finished behind the Chinese Guan Chenchen (gold with 14,633) and Tang Xijing (silver with 14,233). Simone has spent the last week continuing to train and be evaluated by the team doctor, Dr.

Marcia Faustin. At the end of the year, Biles hinted that she may want to stay somehow until the Paris 2024 Games to honor the French coaches Laurent and Cecile Landi. In the post exercise interview, she said: "We are not just entertainment, we talk more about the mental health problem of athletes.

And since we are no longer children, now that we are grown up we can do it ourselves." Simone Biles with a tweet thanked all her fans and supporters for the affection received after retiring from the team All Aroud and the individual All Around, in the artistic gymnastics competition at the Tokyo 2021 Olympics.

The six-time Olympic champion wrote that all the messages received made her understand that what she left in people goes beyond what she showed in almost ten years at the top of gymnastics. Simone wrote: "The outpouring love & support I’ve received has made me realize I’m more than my accomplishments and gymnastics which I never truly believed before."

Team USA announced that Simone would not defend the title of the general competition and that participation in the individual tests of the week test would be decided after a further medical evaluation. Former First Lady Michelle Obama, who tweeted: “Am I good enough? Yes I am.

The mantra that I practice daily. Simone Biles, we are proud of you and we are cheering for you. " Mikaela Shiffrin added on Twitter: "There is weight. There is pressure. And there is love. Those things all exist in the same space. And they always will."