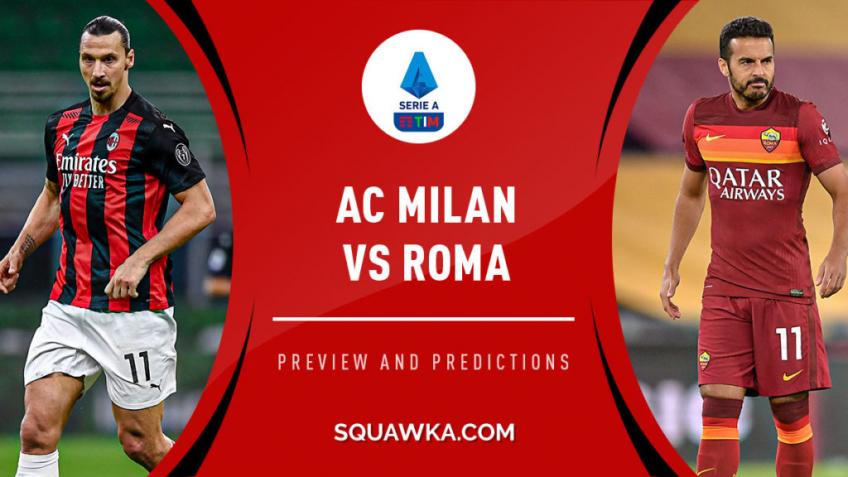 The match between Milan and Roma tonight (20:45) will be a kind of American derby, since the owners of both clubs are Americans. The duel at San Siro will also be a big clash between two "written off" coaches, to whom only the greatest optimists gave a chance at the beginning of spring to stay on the benches of their teams.

The duel at Meazza will also be a test of the strength of two giants in their advanced years, but still the best players of their teams: Zlatan Ibrahimovic and Edin Dzeko. As much as the unexpectedly quick recovery of Chalhanoglu made coach Stefan Pioli and the Milan fans happy, the news about the positive test of Donnaruma on Covid-19 worried everyone in Milan.

An alternative for the Italian national team goalkeeper is Tatarusanu. He is not a bad goalkeeper, but he certainly is not good enough like Donnaruma In the last two years, the Rossoneri have often coped well with Roma, as evidenced by the score of three victories in the last five matches.

Optimism in the ranks of Pioli's team instills a very convincing return of Romagnoli after a long absence due to injury, the progress of Kessie and Benacer in the middle of the field, the rise of the young Belgian Saelmaekers and Chalhanoglu is better and better

Technical director Paolo Maldini insisted so much on bringing and extending Ibrahimovic's contract that it is no surprise to them that the world is getting to know football player Benjamin Button, alias Zlatan Ibrahimovic.

Pioli rested several players on the road in Glasgow against Celtic, and tonight we will see the strongest possible team of the Rossoneri. Let us remind you, in addition to Donnaruma, Gabi and Hauge are positive on COVID-19, while Rebić and Musacchio are injured.

Roma isn't much luck lately when they visit Lombardy in the last two years: they failed to record victories against Milan, Inter and Atalanta. However, as all taboos are falling this season, it is possible that another one will be dispelled tonight.

Paulo Fonseca showed great flexibility at the start of the season. Unlike other coaches, including Conte, Pirlo, and Inzaghi, the Portuguese adjusted the formation of the Jalorossi in relation to the players he had at his disposal.

In that context, after the confirmation that Mancini is not positive on COVID-19, the head of the professional staff will return the starting lineup with three defenders in the line. Smalling is still injured, so a trio of young lions (Mancini, Ibanez, Kumbulla) will run on the field.

In the middle of the field, the only novelty could be Karsdorp instead of Santon. In Rome, they believe that Spinazzola could be a bowl on the scales that would prevail on the side of the Jaloros. The former Juventus and Atalanta player is in great shape and Trigoria hopes that Spinazzola will be healthy this season.

For Roma, the points against Milan are very important because they see the Rossoneri in Trigoria as competitors for the fourth place that leads to the Champions League. The key goal for Fonseca is not to allow his colleague Pioli to escape him by eight points difference after only five rounds.

TODAY'S MOST POPULAR
NEWS
Tokyo 2021 LIVE: China won the 4x200 freestyle, Dressel won the 100 freestyle
Daniil Medvedev: Who will be responsible if I die on court?
Novak Djokovic: Pressure is a privilege
All-Pro cornerback Xavien Howard requests trade from Dolphins
Nick Kyrgios reacts to beating Kevin Anderson at Atlanta Open
Tokyo 2021 LIVE: The medal table updated on 29/7/2021
Simone Biles: "Thanks for the support!"
THIS WEEK MOST POPULAR
NEWS
Federica Pellegrini: "I'll think of having a child when..."
Federica Pellegrini will retire from swimming in 2021
Michael Phelps: the most titanic of the titans
Tokyo 2021 LIVE: Vanessa Ferrari leads ahead Simone Biles!
Brock Lesnar's come back: are we finally here?
Mavs' Maxi Kleber: Clippers' reaction to Kawhi Leonard's dunk crossed line
Tokyo 2021 LIVE: The medal table of 7/26/2021!