Dallas Stars gave the Tampa Bay Lightning a lesson: 4-1 and it took the Stanley Cup game-1 best of 7 games in Saturday night's match at Roger's Place in Edmonton. The difference is in the shots on goal: for Dallas 19 shots and 4 goals, for Tampa 36 shots and a goal.

Joel Hanley is on the net in the first period, then after the draw, in the second period with the puck making the pinball ball and with a daring double touch on two skates with a final touch by Gourde, Dallas returns with Jamie Oleksiak (yet another defender Texan to go online in these playoffs).

T he 3-1 comes thanks to Finn Joel Kiviranta at the end of the third, a shot on which Vasilevskiy could have definitely done better. The fourth realization of Jason Dickinson with an empty door then definitively closes the accounts.

Tomorrow night race-2 with Tampa that could recover its star, Steven Stamkos, always absent in the playoffs until now. 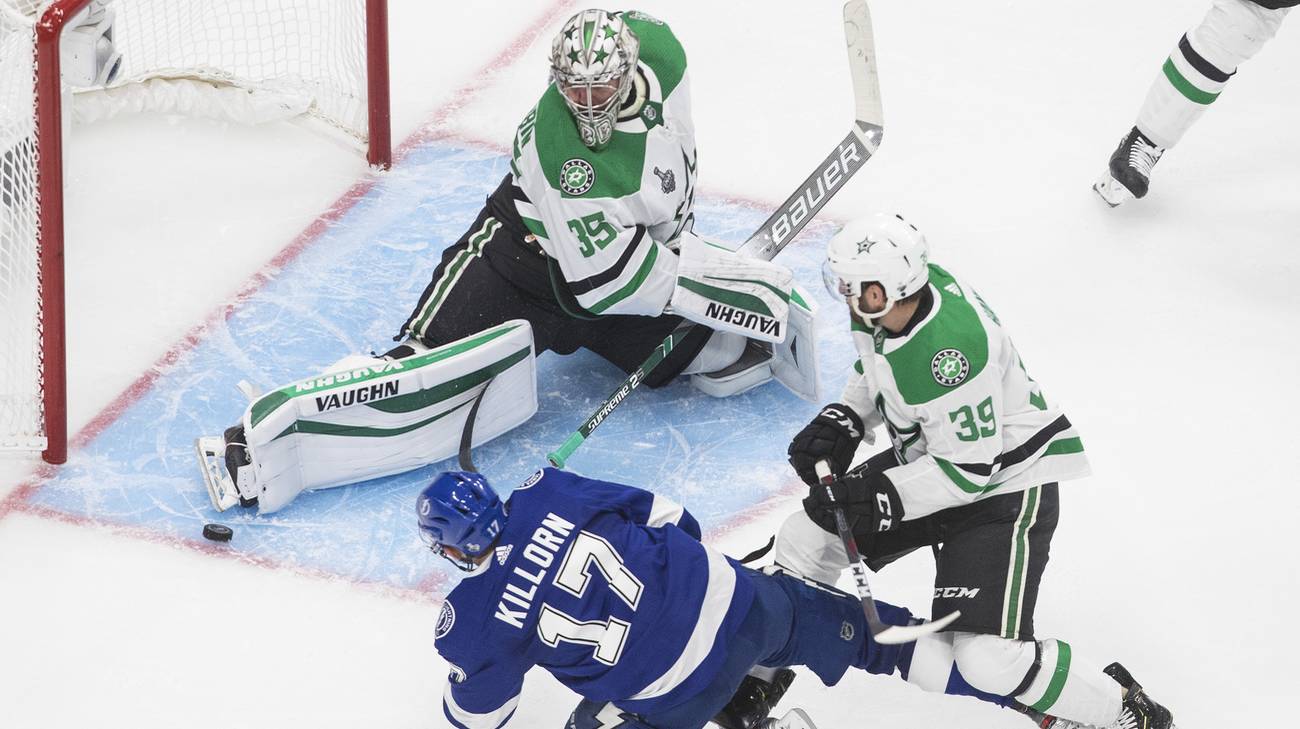 Meanwhile, some days ago we told you how Oskar Lindblom come back to playe with Philadelphia Flyers after beating cancer, in a night not like any other in the middle of the NHL playoffs, when players play in two Canadian bubbles, Vancouver and Toronto.

As in all sports in this restart, a very tight calendar supported by very hard bodychecks, spectacular goals, great saves and a lot of competition. For one night, however, a story and a man are more significant than the results.

In Toronto, at ScotiaBank Arena, the Philadelphia Flyers for the decisive game 6 against the New York Islanders cannot use the injured Sean Couturier, one of the most important strikers they have, and then the doors open for the Swede's return to the team Oskar Lindblom.

A good start to the season, even with 11 goals and 7 assists in the initial 30 games; then, however, at the end of November the first discomfort in the side and chest arrive. Almost all hockey players speak very little and hit a lot, but they certainly don't allow themselves to be affected by pain.

Indeed, they live with it with pride. Alma, his fiancée, however, insisted that he show up and probably saved his life. The verdict of the doctors was one of those who leave stone. Ewing's Sarcoma. A rare form of bone cancer that had attached him to the rib cage.

Lots of chemotherapy and a complicated operation to replace part of the rib bones with Kevlar. Dark nights, but always burning determination. On July 2nd, the last chemo session at the Abramson Cancer Center, a trip home to Sweden to see the family and start to skate a bit with the old mates of Brynas IF.

Back in America, the mandatory quarantine in this period was less than nothing; the Cancer Free verdict pronounced by the doctors, among other things on his 24th birthday in mid-August, a warm hug even for those used to the cold.

“I'm happy, I can't complain - he said as soon as I arrived in Toronto - Being back with my teammates and returning to the ice makes me feel normal and gives me energy. When they told me about my illness in December, I felt empty, but only two days later I set myself the goal of returning to play.

" 265 days after the tumor was discovered, he returned to the ice for an NHL playoff game and contributed to the decisive victory of his team. Of course the match report highlights the saves of the extraordinary and talented goalkeeper Carter Hart, the goal in the double overtime by the defender Ivan Provorov, but the cover certainly deserves it Oskar Lindblom.

He, his perseverance, the courage and inspiration he brought to the Flyers' locker room. If we skim all the possible platitudes, the clichés and the obvious and a little cloying references to the fairy tales that will probably be written in the world for yesterday's night, his story remains an incredible story.

Wonderful for the finish. Seeing his orange-white shirt with the number 23 on the ice is a nice message for everyone. A number that is worth much more in basketball than on ice.

TODAY'S MOST POPULAR
NEWS
"For Brock Lesnar, money is everything," said ...
Klopp: "The spine was broken and then it's very difficult to move"
Neymar has extended his contract with PSG until 2025!
Kurt Angle: "Here is the most underrated superstar of the modern era"
Edinson Cavani will be the first striker next season?
Anthony Davis leaves game early versus Trail Blazers
Dominic Thiem reveals sacrifices he made to make it in tennis
THIS WEEK MOST POPULAR
NEWS
"The love story between Roger Federer and Mirka.." said a coach
Rafael Nadal said Roger Federer is one of his best friends on Tour
Feliciano Lopez on Roger Federer and Djokovic's absence in Madrid
Djokovic and Nadal will be present at the Italian Open 2021!
ATP Madrid 2021: Rafael Nadal leads the draw
Kurt Angle new amazing physical transformation!
ATP Madrid 2021 Draw: Rafael Nadal could clash Jannik Sinner